Fly in the wind is about air pollution. It tells about three persons, who work for a TV channel. They are sent out to check on a volcano eruption and the events in town. At the same time the group is chasing a statue, which has disappeared. 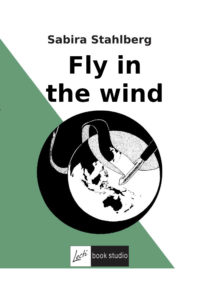 The visible level are the trips of the group in the town and outside it. The power plants are burning and there are fires in the streets, and the inhabitants run away from the town.

The book describes possible consequences of a volcano eruption and how people react to crises and air pollution.

In the key at the end of the book different kinds of pollution are described, which are let out into nature and can be found in the air we breathe.

There also the question is asked what we can do to reduce pollution.

Place: A town with a volcano nearby

Group: From 12 years, but also younger is possible

Discussion: Compare the key with the story.

Discuss what kind of air we breathe. Is it good for the body?

Is the air quality good in the place where you are right now?

How do humans influence pollution in nature and especially in the air?

Where are we standing right now in terms of pollution and in which direction are we going?

What can we do to reduce air pollution?

Where are the most polluted places in the world?

What can you do in everyday life to reduce air pollution?

What kind of world would you like to live in? How possible is it that you can live in a world with clean air in the future?

What is the future like for the air? What kind of future do you want?

Which thoughts does the story awaken in you?

What would you do in place of the main character?

Answer the question at the end of the book: what can you do?

Describe a time in history during the past one hundred years, or a place in the world, and tell how air pollution has influenced it.